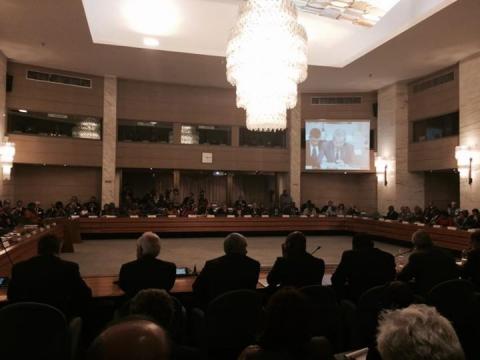 The Piedmont Centre for African Studies is a multidisciplinary centre dedicated to the study and strengthening of the relations of Piedmont and Italy with the African continent. To achieve this goal, the Centre organises conferences and cultural events, promotes research and presents books and publishing activities.

The main activities at the Centre last year included the remembrance of the Rwandan Genocide, culminating at Turin’s Museo Diffuso della Resistenza with the screening of Turinese director Alessandro Rocca’s “The Consul’s List”, depicting the life and activity of Pier Antonio Costa, the Italian Consul in Kigali in 1994, Nobel Peace Prize Candidate in 2010 and recipient of the Golden Medal for Civil Valour for his relentless efforts that saved almost two thousands of people during the genocide.

Migrations have been a key theme for our Centre in the last two years, starting in 2015 with the 25th anniversary of the International Convention on the Protection of the Rights of All Migrant Workers and Members of Their Families. On the 12th of January 2016 the CSA has organised, in collaboration with the Institute for International Affairs (IAI), a debate in Rome, hosted in the Italian Ministry for Foreign Affairs and International Cooperation and overseen by the Ministry of Foreign Affairs Paolo Gentiloni. The debate was one of the main events of a series of activities organised by the CSA starting in 2015, titled “Rights, migrations and international relations”, including debates in Turin and Rome. The main issues discussed in the event on the 12th of January have been the role of migrations in international law and relations and migration as a chance to develop an Italian-African Agenda. The other events have been focused on the rights of migrants and their families.

The CSA, jointly with the Italian Association for African Studies, has also dealt with the issue of urbanisation in Africa. An international conference has been organised on this topic, titled “L’Africa delle città – Urban Africa”. The event took place on the 16th and 17th of October 2015, in which the role of cities in the development and changes of contemporary Africa has been analysed with a multidisciplinary approach. The convention promoted a multidisciplinary approach to complex issues, thanks to internationally recognised keynote speakers that have proposed various research perspectives on the issue: historical, economic, anthropological, geographical and legal. On the previous day, the 15th of October, the keynote speaker participated in the Third World Forum of Local Economic Development, working in the workshop titled “Development challenges for African cities: populations, economies, cultures”.

The Centre has also started a series of projects to analyse the economic relations with the African continent, participating along with other institutes in the organisation of events and debates. With the IAI the Centre has promoted the closed seminar “Promoting sustainable development in Sub-Saharan Africa: building a private-public partnership” (9th of July) at the Turin Chamber of Commerce.

The CSA has also participated in the convention “Dynamics and perspectives of Sub-Saharan Africa”, organised by the Society of Diplomatic Studies in Rome on November 25th. The conference has been opened by a speech of Prof. Romano Prodi. The debate included speakers such as the Ministers Raffaele De Lutio and Giampaolo Cantini and Alexis Rondos, the EU Special Representative for the Horn of Africa Region. Regarding the economic relations with Africa, on November 27th the has organised together with the Turin Observatory of Emerging Economies a conference titled “The African economic reawakening; two successful case studies”, as part of the 2nd Workshop on Emerging Economies (November 27th-28th). The discussion was focused on Ghana and Morocco, thanks to the participation of Piedmontese entrepreneurs, experts from the OECD and academics.

The CSA is also extremely active in organising and promoting cultural events in the Piedmont region. The Centre is one of the organisers of the first edition of “creativAfrica”, a series of events, meetings and projects related to African culture in Turin, appreciated by the broader public (the participants were over 4000) and specialists alike. This cultural event was a chance to organise together NGOs with different experiences and backgrounds, drawing on the possibilities offered by digital coordination. The two organisations were Africoeur and Ottobre Africano.